Afraid of the Possibility of an Imminent Cyber-attack? Security Testing is Key!

Cybersecurity is quickly becoming more of a business expense, rather than merely a technical issue. It is particularly necessary for businesses to ensure that the right resources are on the job, and that the right tools are in place. Often, a security breach cannot be altogether avoided; however, it is imperative that the issue is dealt with by taking immediate action. In the event of a delay, the reputation of the organization is severely impacted, that too, for a long time to come.

In particular, many large corporates in the United Kingdom are not taking enough precaution in order to avoid or immediately deal with a cyber-attack. Statistics show that over the past year, more than half the businesses in UK have been victimized by a cyber-attack. The good news is that a big number of these businesses admitted to being certain about bouncing back to business quickly after such an attack.

Recent reports suggest that banks in Britain are avoiding reporting the true magnitude of cyber-attack cases. Although they deal with the issue on a legal level, for the most part, to avoid penalty and embarrassment, the banks often do not reveal the whole picture. Instead, they opt for damage control and continue to function without batting an eyelid. The banks go as far as to conceal severe security breaches for fear of public reaction.

“Cyber-attack” on a product or service often refers to data compromise, and makes consumers of a product or service vulnerable to fraud by exposing their details. Because the most benefit that can be derived from a fraud is monetary in nature, several E-commerce organizations and banking institutions remain prime targets.

Distributed Denial of Service (DDoS) attacks continue to target E-commerce organizations. In particular, the attacks attempt to stall website operations through server crashes and application layer attacks. While the server-down issues can be quickly resolved, in comparison, application layer attacks are harder to detect. This is because they focus on one internal part of a website, and this eventually leads to an application crash.

According to an internet retailer report, about 40.0% of the entire SQL injection attacks throughout that period specifically targeted retail websites. In an SQL injection, hackers supplement bits of malicious code into a particular data-entry field. For example, one that requests a customer’s address. If a database is not appropriately configured, there are chances that malicious code can then transmit the contents of the database to the attacker. In general, offenders on cyber space have turned out to be more active as the years pass by.

As digital technology takes over most businesses, consumer data remains key to formulating and executing many business strategies. Apart from banking institutes and E-Commerce organizations, many other businesses are also increasingly aware of the need to have a robust security testing system in place.

Along with the frequency, the sophistication of the cyber-attacks is also on the rise; and the expertise and expense involved in curtailing the attacks is burning holes in company pockets. Reports suggest that in the last year, the number of records exposed in data breaches rose to a whopping 97%. Medical data and business information dealing with intellectual property were theorized to be the prime targets. Even though necessary precautions are taken, businesses can never hope for absolute security. The following graph gives an insight regarding the average cost of a data breach, for the United States, as well as at a global level. The trend shows that the cost is steadily increasing, as 2015 tops the chart with a monstrous $6.53 Million.

Cyber insurance plans are expected to double over the next four years, as demand for them is steadily on the rise. Cyber insurance plans cover a range of costs, along with revenue that was lost from a downtime occurrence, and also notify customers that were affected by a data breach, and provide identity theft protection for the affected customers.

The following list highlights some of the biggest cyber-attacks over the past two years:

2014 – Yahoo!, a global internet information provider, announced in September 2016, that it was massively hacked in the year 2014. Reports suggested that Yahoo! could have been careful with its security measures. Frustrated customers alleged that they are asked to submit details from organizations on the pretext of security, only to end up having their information stolen or misused, due to lack of actual security measures.

2015 – TalkTalk, a phone and broadband provider, which has more than four million UK customers, was hacked in 2015. The firm admitted to hackers having accessed almost 1.2 million email addresses, names and phone numbers, and 21,000 unique bank account numbers and sort codes. Although the company assured that the scale of attack was not very high, it does not detract from the seriousness of the incident.

2016 – Myspace, a social networking website was hacked and details were made available for sale on an online hacker forum. A report from LeakedSource.com said that over 360 million accounts were involved. Each record comprised of an email address, a password, and in a few cases, a second password as well. Although the data hacked was several years old, the mere volume of the data makes it notable.

Security testing, which is a significant part of software testing, anticipates susceptibilities in the system and strives to protect its data and resources from possible intruders.

The consequences of a potential security breach are momentous: legal liability, loss of revenues, loss of customer trust and damage to credibility. Security testing guarantees the reputation of organizations, confidence of customers, privacy of sensitive data, and, inevitably, trust.

There are mainly four focus areas to be considered in the process of security testing:

Cybercriminals are very innovative and keep coming up with newer and advanced ways of breaking into systems and applications. The mere process of security testing is seldom the only measure to test how secure an application really is. However, it is strongly suggested that security testing is encompassed in the standard application life cycle. In a world teeming with hackers, the trust factor plays a huge role for consumers.

There are quite a few challenges associated with Security testing:

[Tweet “The need for #testing professionals that are accredited and possess #ethicalhacking skills proves to be a challenge for #Securitytesting.”]

What most organizations lack today in is a team that can completely focus on performing security and the other critical forms of tests such as digital, cloud, automation, software, performance, big data, and more. Due to this, a lot of applications are launched in the market without being tested thoroughly. This has led to the critical need for pureplay independent software testing vendors who can provide the focused approach to testing so desired.

The Security Testing services provided by Cigniti Technologies comprise an in-depth security analysis maintained by reports and dashboards that are comprehensive, in addition to remedial measures for any issues that may be found. Cigniti also has exceptional expertise in Security Testing for mobile applications, web applications, web services, and software products, both over the cloud, as well as on premise.

To know more about the array of security-specific solutions our services can provide, visit our website and get in touch with our experts.

An Overview of HIPAA Compliance Testing in Software Applications

Listen on the go! Are you using any software that is related to an individual’s information? Anything that deals with... read more 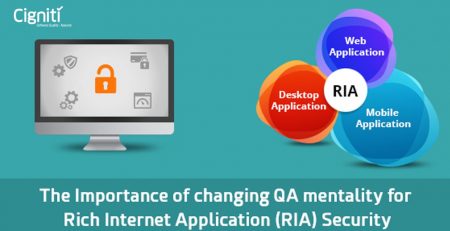 How to build a sustainable cyber security plan

Listen on the go! The 16th National Cyber Security Awareness Month (NCSAM) is approaching its conclusion. Focusing on the idea of... read more