How NFTs are Reinventing the Digital World

One of the technological evolutions that has caught the attention in recent times is Non-Fungible Tokens (NFTs). It has been a phenomenon, with the values of some of the NFTs reaching astronomical heights. It remains to be seen whether this will be a bubble like the Tulip Mania or the Dot Com bubble, or whether it will mature into a viable technological option. Whatever the market dynamics in terms of value, NFTs do offer use cases that can be of great interest to the current day’s digital world.

What are NFTs? NFT expands to non-fungible tokens. As a definition, we can define NFT as “a cryptographic asset on a blockchain with identification codes that distinguish them from each other.” Importantly, they can’t be traded or exchanged at equal value like cryptocurrency and fungible tokens.

While NFT is a token, i.e., a digital asset, it is not fungible in the sense that each NFT is distinguishable or unique and hence cannot be traded for each other.

Let’s delve a little more into the various features of an NFT.

This leads to a popular question. Is a Non-Fungible token the same as a crypto currency? Not really.

The below table summarises the difference.

The foremost predecessors of non-fungible tokens were colored coins. These were very small units of bitcoin with specific attributes coded into metadata using Bitcoin’s scripting language. Quantum, the first known NFT minted by Kevin Mccoy in May 2014 and was sold for $1.47m in June 2021.

A new age for NFTs began with Ethereum going live and introducing a set of token standards that allowed the creation of tokens by developers. NFT started spreading greatly through NFT gaming and metaverse projects. One of the first decentralized Ethereum-based VR platforms was Decentraland, in which gamers could build, play games, collect items, and more.

Blockchain Technology – A distributed database that is shared among the nodes of a computer network, unlike the typical database where there is a central repository. The evolution of NFTs can directly be related to the blockchain technology itself.

Smart contract – a software program that can automatically trigger legally tenable actions as per the pre-defined business logic.

Cryptocurrencies – Digital or virtual currencies secured by cryptography, which makes them nearly impossible to counterfeit or double-spend. NFTs are traded through Digital Wallets of crypto currencies.

Akin to blockchain technology, NFTs can find applications across multiple industries. While there can be a wide array of use cases, some of the indicative use cases where NFTs can be deployed are,

While the above are just a sample, there can be numerous applications only challenged by the lack of creativity and the costs of scaling up the physical infrastructure.

However, just like with any technology or any asset that holds value, come its own challenges,

Just as with a blockchain, NFTs also need a comprehensive validation framework that needs to be multi-dimensional. The major components of the testing program can be divided into three categories.

We need to give special focus to blockchain specific test elements such as configurations with respect to Data Integration and Transparency, Privacy, Network, Security, and Identity Management for an effective validation program.

Cigniti has a comprehensive blockchain assurance solution and the details can be found on the blog ‘https://cigniti.com/blog/creating-assurance-blockchain-world/’

Cigniti is one of the few IT service providers to have invested in a couple of its own blockchain sandboxes across diverse blockchain technologies. These sandboxes are designed to quickly create a viable prototype for any business application, providing a ready environment to test the viability of the concept and effectiveness of its configuration.

Need help? Talk to our blockchain testing experts to learn more about how NFTs are reinventing the digital world, and how Cigniti can help with making the blockchain compliant. 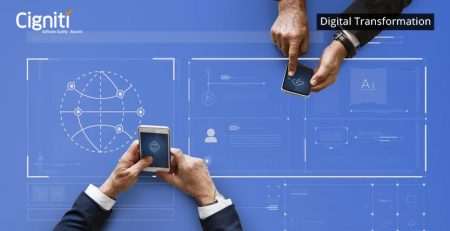 The case of Digital Transformation success and failure

Listen on the go! Contrary to the popular belief, digital transformation does not entail the complete uprooting of existing business... read more 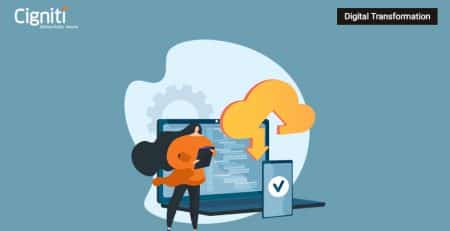 Accelerating Digital Transformation Through the Cloud

Listen on the go! Whether you agree or not, conventional businesses have become redundant by the advent of technologies like... read more 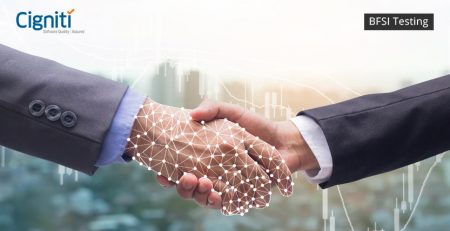 Why is RPA Needed for Transforming the BFSI Industry

Listen on the go! Banking Financial Services and Insurance industry continues to house many legacy applications and business processes that... read more