The first generation iPhone was released nearly a decade ago, and the product was nothing short of revolutionary. It changed the way people looked at phones and handled them altogether. The most recent version is much awaited, but by now, most people know the drill. The product is far from “revolutionary”, as apart from slight performance enhancements and a new design, it can hardly boast of being avant-garde. The device is still very much awaited and sought after; however, just the fact that a new version now means more features rather than a completely new concept highlights the prominence that Quality Assurance holds.

Over the past few years, most enterprises generally categorized their testing service offerings in the bracket of Managed testing services. They ensured that they would be able to prevent defects and continuously measure improvement of performance through reduced expenditure. Recent times, however, have seen a significant change in software testing dynamics with more organizations looking to automate testing processes. E-commerce websites and mobile applications have ensured that testing services support digital technology.

Nelson Hall’s report on ‘Transforming Software Testing Services through Transformation’ assures that testing service vendors have worked over the years to ensure that the services they provide are in tune with the market demands. Many enterprises, the report goes on to add, have added-on commercial-off-the-shelf (COTS) testing with their own proprietary accelerators and IPs, chalking out frameworks built by effective tools. The proprietary accelerators and IPs, along with specific frameworks help assist the clients in generating faster and better return on investment (ROI). BFSI industries hold large portfolios and are likely to spearhead the transformation brought about with innovation, leading to demand for IP-led testing services in the future.

As more corporations adopt digital technologies, correspondingly, their legacy systems need to be upgraded. The demand for global testing has been on the rise as the upgrades are required to be authenticated. In order to ensure that security features and the general functionality are either enhanced or maintained, thorough end-to-end testing needs to be done, covering especially the edge-case scenarios, in order to ensure that the corporations’ end products offer what they claim. In order to meticulously ensure that the integrated systems of the corporations are validated, independent testing services through third-party organizations are also being largely sought after.

Mobile applications in particular are growing rapidly in number, which invariably translates to diverse functionality of applications:

Add to these functionalities the various operating systems and different screen sizes and processing capacities, just the segment of mobile phones show exactly how essential Quality Assurance is; not just the quality, but also with speed. Naturally, organizations would maintain that productivity and ROI are just as important, as they are willing to spend time and effort ensuring that their services delight the end-users.

Listen on the go! Banking and financial services have always been extremely formal in nature, and for good reason. They... read more 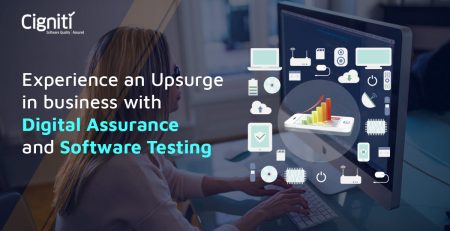 Experience an Upsurge in business with Digital Assurance and Software Testing

Listen on the go! Digital Transformation as a concept is bullying the enterprise and business scenario, pushing for more consumer... read more

Listen on the go! Recently, when Sophia, a robot developed by Hanson Robotics mocked the warnings by Elon Musk about... read more