The Critical Portfolio of SDETs, the Technology Unicorns

With the rapid tech advancements and with every industry experiencing a wave of digital disruption, one thing has emerged from the backdrop and has taken the center stage – user experience. The need to deliver enhanced user experience and to generate optimal satisfaction at the end is what is driving the current industry trends and innovations.

Due to the same need for yielding high user experience, there is an exponential rise in the demand for Software Engineers in Test or SDETs in the IT industry. However, there is a major imbalance between their supply and demand. This lack of proportion may mainly be attributed to the sense of ambiguity regarding the actual role of an SDET. A know-it-all person, who can single-handedly deal with all the test code related aspects of any Software Development Life Cycle – this sounds great in theory, is equally difficult in practice. Just like a unicorn, SDETs are too good to be true! Or, are they?

While dealing with the ambiguousness of the role of an SDET, this blog tries to answer all the questions that CXOs are having, such as, who is an SDET- a tester who codes or a coder who tests? What can an SDET bring to the table?

SDET – Only a fancy term for testers?

Yes and No. This is a fancy designation, but that is not just it. A jack of all trades of a software development life cycle, an SDET is characterized by exceptional designing, developing, and testing skills in addition to a pragmatic approach and vision for SDLC-related problems. With the knowledge of both testing and developing, SDETs are thoroughly invested in each aspect of an SDLC cycle while mainly focusing on the testability, performance, and sturdiness of the product. Being involved in every step, they know the software inside out, and thus, can identify and pin-point errors and defects rather easily. SDETs are aware of the product requirements and guidelines, which help them ensure that the software is compliant.

SDETs are expected to have certain technical as well as non-technical skills. In addition to being tech-savant, SDETs are defined by their customer-centric attitude, passion for their work, proactive approach to potential risks, and strategic thinking. Through mind-mapping, SDETs can analyze patterns to avoid any slippery slopes.

With their “customer-first” attitude, these allrounders can facilitate the shift-left of a project, through optimized time, cost, and materials. Through their impeccable visualizing and analyzing capabilities, they can significantly reduce any incidents at the time of production, and make sure that only high-quality software reaches the customer.

Talking about the technical skills, SDETs must have designing and programming skills with thorough knowledge of programming languages such as .Net, Java, C#. They should be well-articulated with different testing methodologies and tools such as MS Test, Selenium WebDriver, TestNG, NUnit, etc. Having an object-oriented design understanding, SDETs are expected to have prior exposure to Behavior-Driven Development (BDD) as well as Agile and DevOps processes.

How do SDETs perform the magic?

SDETs are subject matter experts (SMEs) with a solid test practice lineage and impeccable development skills. These process champions are metrics driven and always take a customer-centric approach, which come handy in the current environment where customers are the focus.

With SDETs, the accountability and ownership do not get decentralized across several disciplines. Instead, SDETs themselves are responsible for ensuring delivery of a high-quality feature or software. By employing high user scenarios for code-breaking and unit testing for extensive code coverage, these geniuses streamline faster delivery while maintaining the quality.

They are essentially a one-man army, who can design, build, deploy, run, as well as manage an entire application by themselves. Capable of both white-box and black-box testing, they are well-versed with the designing and development phases of the SDLC, and therefore, can support the overall organizational and business goals through their well-informed decisions. They are active participants in detail designing, code reviewing, and defect reviewing. Through these reviews and feedback, SDETs leads to the improvement in the test coverage while developing test suites. These Testers-cum-Developers, or rather DevTesters perform troubleshooting and code analysis to identify defect patterns and take measures accordingly. Proficient in Agile and Scrum development, SDETs develop standard, maintainable, and performance-driven automation codes to support the DevOps and Agile transformations across industry verticals.

Where to find these Testing Wizards?

As there is a huge gap between the demand and supply of SDETs, it is very challenging to find and hire a person who embodies all the technical as well as non-technical skills that are expected out of an SDET.

In order to inculcate Quality ownership and prevent handoffs of accountability, Microsoft invented the role of SDETs in early 2000s. They wanted a person who will be involved, invested, and engaged in the entire cycle from start-to-finish. By doing so, Microsoft wanted to empower their “Shift-left” strategy with a more robust QA process. They created a hybrid role that encompassed the responsibilities of both a tester and a developer. Since, they created the role, they only were responsible to fill in the positions as well. Instead of going out on a mad man-hunt, they took a more logical approach. Instead of finding SDETs, Microsoft trained its existing Software Development Engineers (SDEs) and Software Testing Engineers (STEs) to take the charge. Their skills were honed to fit in with the desired profile of a Software Engineer in Test. By doing this, not only was Microsoft able to fill the position with people who met the benchmark, but also with people whose skills were curated to fulfill the needs and resolve the issues that the organization was facing.

This is the best possible way to deal with the current shortage of SDETs. If you cannot find them, build them as per your requirements and needs.

The buzz around SDETs is not new. It has been around for almost a decade now. However, the surge in their demand is comparatively recent, driven by the shift from manual to automation testing. There is a misconception that the workload for an SDET is significantly higher than traditional testers. The truth is, while the workload remains the same as before, the process becomes extremely efficient and faster with lesser scope of errors and risks. Software Development Engineers in Test are essentially the hybrid of a developer and tester, who designs, develops, and manages high-quality test code to deliver a bug-proof, risk-free application in the end.

With an in-house pool of highly-skilled and efficient SDETs, Cigniti strives to provide state-of-the-art testing services. Connect with us to leverage our skill sets and infrastructure, and help your organization achieve Quality Excellence. 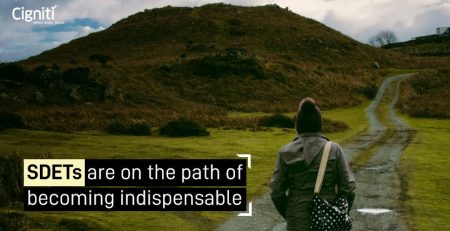 SDETs are on the path of becoming indispensable

Listen on the go! With the advent of the digital era, companies have become highly competitive and are looking for... read more 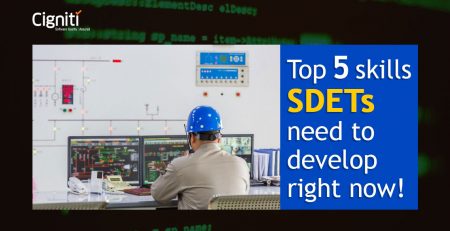 Listen on the go! The skills required for Software Development and Quality Assurance need to evolve constantly. Moreover, with the... read more